We would like to invite you to our upcoming exhibition:

A project by Nora and Fritz Best

Since 2011 disturbing news from Syria abound in our media. In most cases, journalists report mainly about excessive violence and brutality, the Syrian population who is bearing the burden of the conflict, appears as a grey mass of victims, rather than as individuals.

The project “Cutting away the Void – Hafer al farargh” by the artist couple Nora und Fritz Best seeks to put the ordinary Syrians back into focus. From October 18 till 26, the Art-Lab Berlin will show portraits of Syrian refugees in Jordan together with the results of a workshop conducted with refugee children.

Nora and Fritz Best travelled to the Jordanian capital Amman in December 2013. Driven by the wish to make a statement against violence and to seek ways, in which to help the Syrian population come to terms with their dramatic experiences, they produced a series of linocuts with wounded adults and children. Each image bears witness to a life left behind or a traumatic experience.

During the day, the artists worked with women and men who were being treated at the “House of the Syrian Wounded“. In the evening, they offered courses for children. Many children cannot go to school, there are not sufficient places. Those who go to school are taught in the afternoon, after the Jordanian children, the teachers working double shifts. Many of these children have suffered traumas, traumas that often have not been addressed, but that surfaced during conversations with them.

For the artists, trauma relief and documentation was central. Working with linocut technique means starting with a black, negative surface instead of a white one. The image appears as material is cut away. Learning an artisanal, artistic technique and talking about their experiences during the workshops offered the participants the possibility to face painful memories and to regain a feeling of empowerment.

In September 2014 Nora and Fritz Best received the “Art Raker Award for Innovation in Narrative“ of the British organization Art Raker. 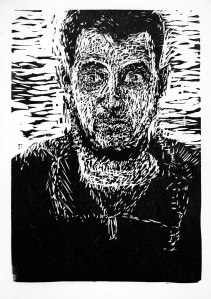 Bashar:  I am going back home. My father is still there, he is a doctor. In the beginning we started treating the wounded. We had to defend ourselves. 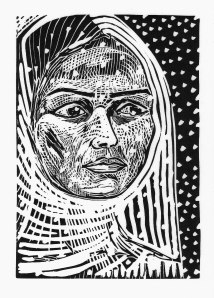 Lubna: I went out in the morning to catch the microbus. Somebody started shooting from the roof. Everybody around me was killed, except me. I was newlywed. My husband, who is in the army came to visit me in the hospital. When he saw the state I was in, he divorced me.

Nora Best was born in Damascus, Syria in 1978. She studied fine arts at the University of Damascus and History of art at the University of Perpignan in France. She taught Art at a vocational school in Douma, Syria and History of art at the National Academy of Music in Damascus. Since 2006 she has maintained two studios in the historic centre of Damascus where she does her own work, and has organised workshops and discussion groups with local artists. Most of Nora’s work is on paper and using water based mediums. She has always been interested in the portrait, mostly of imaginary or remembered faces. From 2011 the upheavals in Syria had a profound effect on her work and she struggled to find the adequate means to respond to the pain she was witnessing around her.

Fritz Best was born in London in 1964. He studied Painting and Printmaking at St. Martin’s School of Art and the Slade School of Fine Art in London and trained as a printer at the London College of Printing. Most of his work is informed by graphic processes. Trans-cultural dialogue has always been an important theme his life. During his time as Professor of Printmaking at Leipzig’s Academy of Visual Arts, Fritz ran an exchange programme with Art faculties in the Middle East. He conducted German-Arab workshops and curated exhibitions in the Arab World and Germany. His experience of working in Arab countries has profoundly affected his work and fuelled his interest in generating documentary strategies.

Both artists will be present at Art-Lab Berlin during the opening and also on October 26.10.

The exhibition “Cutting Away the Void – Hafer al farargh” takes place in the frame of the FORUM for new arab art. The FORUM is an ongoing, interdisciplinary project that seeks to follow new developments and approaches in contemporary visual practice in the Arab countries. It presents a series of events throughout the year, such as exhibitions, video and film screenings, performances and artists’ talks.