In the framework of this year’s “Ortstermin” festival, the local art festival of Berlin-Moabit, June 7 – 9, 2013, the FORUM for new arab art presented the first of a planned series of video dialogues. 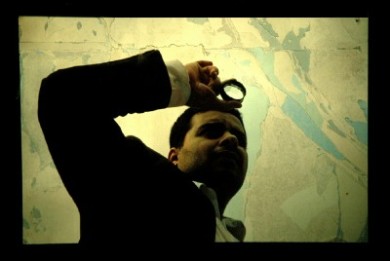 The video dialogue presented two videos that explore different notions of alienation and otherness. The title Aus-Land refers to the German word for “foreign country” = “Ausland”, at the same time, the hyphen adds the idea of exteriority, of being “outside” (“aus”) a country.

Mobility and flexibility, readiness to adapt and improvise are just some of the keywords used in times of a globalized capitalism to suggest how to guarantee economic survival. Thereby, the wellbeing of individual persons is mostly left out of consideration; each human being is left alone in a network of cost-benefit thinking that reduces the entire existence to economic efficiency. At the same time, many are being excluded from this mobility that is transformed into a privilege, a sign of belonging to a questionable, new elite. An elite that is in constant risk of losing all sense of belonging, whether this is defined locally or socially.

In her video The Noise of Silence, the Tunisian artist Moufida Fedhila presents images of a ghetto-like urban environment in an Italian town where African immigrants live surrounded by a high wall, secluded from other parts of the city. The stern, black-and-white aesthetic and the use of slow tracking shots bear a strong resemblance to images from the liberated concentration camps and convey an atmosphere of anxiety and unease. Lebanese artist Ghassan Halwani explores the idea of the birth of an adult in his video Jibraltar, a human being who is born fully grown, but without the burden of a past and memory. What appears like a utopia and a possibility for a fresh start turns toward a nightmarish mirage. Halwani’s protagonist seems utterly lost in a hostile, strange urban landscape. 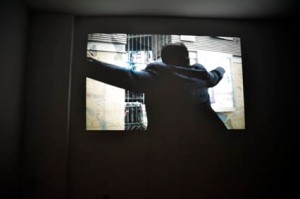 The FORUM for new arab art is an ongoing, interdisciplinary project that seek to follow new developments and approaches in contemporary visual practice in the Arab countries. The FORUM presents a series of events throughout the year, such as exhibitions, video and film screenings, performances and artists’ talks. The Video Dialogue: Aus-Land inaugurates a series of similar dialogues. They will present two videos at a time, of recent or older date, that both explore a similar theme from different angles.

During Ortstermin, Salah Saouli presented a new installation, “White House” in the court of Kunstverein Tiergarten. 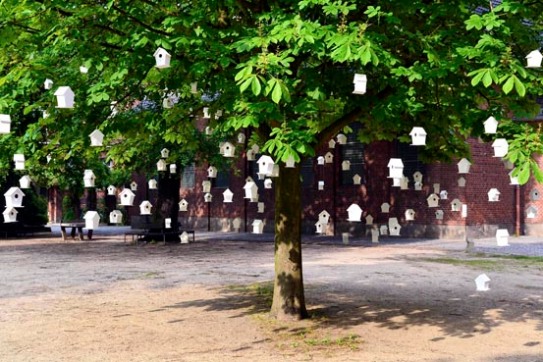 The installation “White House” presents a colony of bird’s houses on a tree. Like a city, a multitude of small, white houses are using every possible space, like in the dense settlements of urban environments. In a time where nature is increasingly pushed back due to human planning and profit, animals are often forced to find new territories in the midst of rough, urban spaces.

“White House” is a warning against the destruction of natural spaces and a call to work against the growing imbalance in nature due to climate change and human interference. It is also a poetic invitation to re-think urban space as an environment that allow for the co-existence of humans, animals and plants.

A visitor made this video of the work: 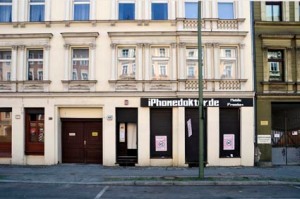